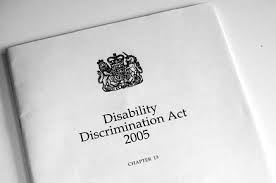 I can't believe it's 25 year anniversary of the Disability Discrimination Act , which was passed on 8th November 1995.

The definition of discrimination is being treated unfairly or put at disadvantage for a reason that relates to your disability.

The legislation which was introduced in to prohibition discrimination on the grounds of disability.

It was significantly extended in 2006 to include areas such as employment and education.

The hope of having this act is to remove the barriers to employment, as in today's society it is still a big barrier .When it come to employment in Scotland today ,approx 9 in 10 of the general population has jobs , that is not the case for people with a disability and individuals on the autistic spectrum ,where only 4.1 people in 100 are in employment, with just 1.6 in 100 people are in jobs or 16 hours or more.

This is clearly defined discrimination, as i know a lot of talent individuals that would love to work ,but not giving a chance, I think employers should do more, they should see what people can bring to the job ,not look at their disability.

In 2020 we should not see discrimination in any walk of life, sadly it is still out there. This doesn't just happen in employment, but also access when out and about, like going to different venues, restaurants, clubs etc.

Many people advise they can't get into a venue , as no proper access , again discrimination , as we all have the right to a night out and everyone else from a party can get in.

Transport is a barrier as well and i know that some train stations are not accessible to get in to and that is before you get on a train i dont know this is still an issues.

I do hope we're not talking about these same issues in another 2 or 5 years,even another 25, that the social landscape for disability equality levels out and barriers we struggle are removed,leaving an open playing field.