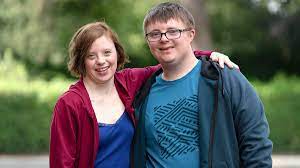 There's a new TV series called Ralph and Katie, a spin off to the A Word, based around a family adjusting to an Autism diagnosis of their son called Joe.

The drama looked beyond the development of a child, also parents, uncles , aunts, grandparents and friends,the impact of Joe's diagnosis, lives not defined by autism. By the end of series 3 that extended family was well established ,the wedding of his grandfather's stepson , Ralph,who has Downs Syndrome, was a significant event. Ralph and Katie will follow the continuing the story of the couple, each episode featuring a different storyline, focusing on the domestic challenges they face.

Similar issues face by all newlyweds, but with an added ingredient in the mix as both have Downs Syndrome. This ground breaking series is created by Peter Bowker, the lead writer on the A Word.

Peter revealed early last year that the team working alongside him were all new and emergency disabled writers, chosen in partnership with the BBC writers room, bringing personal perspectives to the script. What I'd like the viewer to take away from the show , is to look beyond the disability labels, to watch it as a relationship drama,this will hope encourage more people with a disability who would like to move in to acting. Also this is more representation for people with a disability on TV and break further down the employment and social barriers, by creating more role models.